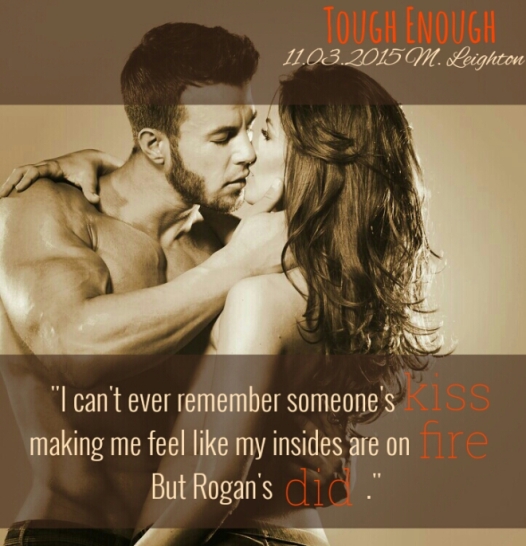 I hear a racy rumble come roaring down my street, getting louder as it approaches. My heart thunders along at a somewhat similar cadence, like the noise alone triggered my internal throttle. No, I don’t know that to be Rogan on his way to pick me up, but then again, yes, I absolutely do. Somehow it sounds like him. I’m already getting a mental picture, even though I’m still sitting on my couch. He told me he might show me what he chooses to drive. Something tells me he’s about to.

When the throbbing engine reaches its peak and then dies right outside, I leap up from my seat and run to the window. My insides twist and slither like a clutch of snakes when I see what’s parked outside. A black-and-silver machine, reading Ducati along the shiny gas tank, rests along the curb. And on its back is Rogan.

He’s wearing a snug white T-shirt and ratty blue jeans. Nothing that would identify him. It’s the way he wears his clothes, the way the fabrics hug his lithe form, even the way he sits on the bike, like he is one with a wild, untamable animal, that is uniquely Rogan.

When he pulls off his helmet, I’m aware of two things. One, that his hair sticks up all over his head in blond spikes that make my fingers itch to touch. And two, that his eyes are on mine. All the way across the yard and through the sheer curtains that cover the glass of the window, they’re trained on mine. I can feel it. It’s like he knows I’m looking at him, like he can feel it, too. And that he honed in on it, on me. Instinctively. It sounds completely insane, but I don’t doubt it. This isn’t the first time I’ve felt him watching me. And it only gets more and more disconcerting.

For a few seconds, he just stares at me. He’s not smiling; he’s just straddling his bike, holding his helmet between his big, strong hands. The intensity of his gaze burns along my nerve ends, causing me to feel both terrified and excited all at once. It also makes me wonder why I agreed to this. I’m not entirely sure I can be trusted around him. He makes me forget. And that’s dangerous.

Finally, his face breaks into a breathtaking smile and I jump away from the window. I keep backing away until I’m safely ensconced in the shadows on the opposite side of the room. I pull in several gulps of air, fanning my flaming face with my nervous hands. I wait impatiently for the moment when he’ll knock and I’ll be face-to-face with what could end up being a nightmare for me.

But he could end up being a dream for you, too