One minute, I’m a woman trying to find her way in the world, and the next, I’m the sender of six of the most embarrassing text messages that have ever been sent in the history of time—or the cell phone.

Mabel “Maybe” Willis died a virgin at the very young age of twenty-four.

She leaves behind her parents, Betty and Bruce, her brother, Evan, a laptop filled with one too many Jason Momoa memes, and a Kindle library with more books than one human being could ever finish in a lifetime.

Cause of death: a text message.

But I may as well have.

One minute, I’m a woman trying to find her way in the world, and the next, I’m the sender of six of the most embarrassing text messages that have ever been sent in the history of time—or the cell phone. Whatever.

And I didn’t just send them to some random person I’ll never see again.

No. That would be too easy.

I sent them to Milo Ives.

The man who played a starring role in all of my teenage fantasies—and my brother’s lifelong best friend.

He’s hard-bodied, blue-eyed, jawline-of-stone handsome, crazy successful, and has more money in his bank account than my brain can fathom.

Deflower me, please? I said.

Mabel “Maybe” Willis is fresh out of college and ready to take on the world of publishing. But that isn’t the only thing she wants to tackle. At 24, Maybe is still have a V card. No one have ever interested Maybe to lose her virginity to.

While looking for a job she is working at her parents flower shop. And the one person she had a crush on since she is a kid walks in, Milo, her brother best friend. Who happens to be a billionaire and one of NYC most eligible bachelors.

Milo haven’t seen Maybe in a while, so when he comes into the Willis’ flower shop to place an order he can’t help but notice the new girl. Not knowing it’s Maybe.  Maybe  a little hurt that he doesn’t recognize her takes it upon herself to take Milo’s number. Not sure what she will do with it. All the while Maybe is unaware that her brother Evan has enlisted Milo help to get Maybe a job in publishing by giving him her number.

A random and funny text message sent  Milo while Maybe is under anesthesia, is the catalyst that starts Maybe pursuit of Milo. And takes us on an entertaining and humorous journey.

My Brother’s Billionaire Best Friend by Max Monroe was a quick, very laughable read. Many of the steps Maybe take to get Milo to  notice her as more than her brother’s little sister was a combination of naiveté, sweet and funny.
There’s a part about DP (not necessarily what you think) that had me laughing for a solid 10 minutes.

The secondary characters of Maybe father Bruce with his funny Bruceisms and her new friend Lena (can I please get a Lena book?), who takes it upon herself to help Maybe get Milo’s attention rounds out this very comical read. It was just the book I needed to give me a great laugh with a very sweet HEA. 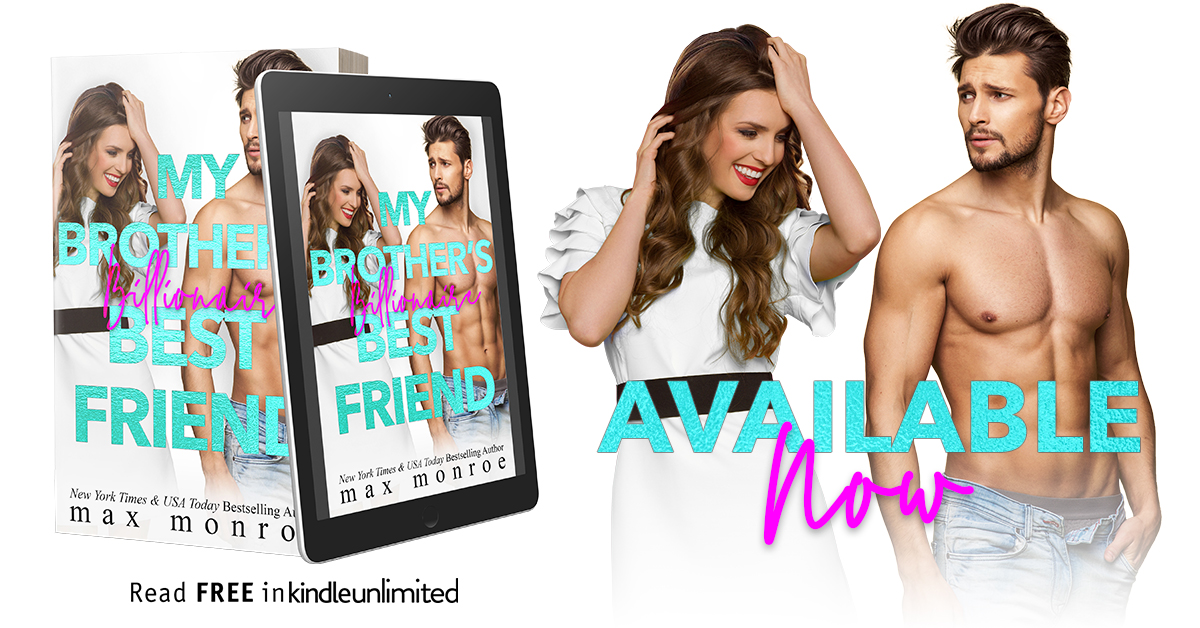 Here I rest, you guys.

I. Mother-flapjacking P. to me.

And now, I’m coming to you live from what I believe is the afterlife.

Just think of this as that morning show with Kelly Ripa and Ryan Seacrest, Live with Kelly and Ryan.

Only, change the name to DEAD with Maybe, take away the celebrity guests, and fill the audience with people who don’t mind witnessing a full-on embarrassment-fueled emotional breakdown.

Good God, if I would’ve known I was going to kick the bucket right before I reached twenty-five, I sure as shit wouldn’t have spent the last six years of my life slaving away at Stanford for a bachelor’s and master’s degree in English Lit.

I would’ve partied in college rather than studying until my eyeballs bled.

I would’ve danced on bars. Flashed some nip for beads at Mardi Gras. Actually gone to Mardi Gras.

I would have indulged in unlimited pasta night at the Olive Garden instead of counting carbs, and I wouldn’t have stopped binge-watching Game of Thrones on season flipping six.

I would have tongue-kissed loads of guys and spread my legs like a contortionist for any of them who seemed reasonably adept.

You know, a little bam-bam in my ham-ham.

Some not-too-big, but not-too-small P in my V.

Sex, you guys. I’m talking about sex. And if you haven’t picked up what I’m putting down from my delirious ramble, I’ll lay it out for you.

I’ve yet to be sexed up by anyone.

That’s right. I have officially bought myself a one-way ticket to the afterlife as a virgin for-freaking-eternity.

And now, I guess I’ll never know how it feels to have an actual penis rub up against my G-spot because, you know, I’m dead. And I’m pretty certain God probably frowns upon people flashing their boobs at the angels and public displays of leg-spreading and definitely the unchaste actions of a desperate-to-bone but unwed woman. No way. Heaven’s strictly G-rated.

I put it all off. I figured I had time. I mean, I thought I’d at least get to see The Office do a reunion special before I went lights out for good.

Although, my parents’ flower shop feels more like purgatory than heaven, and I thought for sure I’d be wearing something other than jean shorts and Converse when I headed to meet the Big Guy upstairs.

Honestly, the afterlife feels eerily like real life, and I’m not one to be dramatic, but I have to be dead, you guys. Seriously. Because no one could live through what I did.

I’m talking a 10.0 on the Richter Scale of embarrassing and awkward.

A Category 5 hurricane of humiliation.

No freaking way I survived that…right?

Okay. Fine. So, I can be a little dramatic sometimes…

And maybe, just maybe, I’m exaggerating things a bit here, but I’m doing it in the name of self-preservation.

Because, trust me, if you did what I did, you’d let yourself mentally pretend to be dead for a little bit too.

Because if I’m not dead, I’m going to have to face the consequences of my awful, humiliating, cringeworthy actions.

I’m going to have to face him.

A man I’ve known since I was a prepubescent girl.

A man I’ve basically been crushing on my whole damn life.

A billion-dollar-empire kind of successful man who just so happens to be my brother’s best friend.

I’ll say it again for the folks in the back.

And I’m in way over my head.

A secret duo of romance authors team up under the New York Times and USA Today Bestselling pseudonym Max Monroe to bring you sexy, laugh-out-loud reads.

Max Monroe is the New York Times and USA Today Bestselling author of more than ten contemporary romance titles. Favorite writing partners and long time friends, Max and Monroe strive to live and write all the fun, sexy swoon so often missing from their Facebook newsfeed. Sarcastic by nature, their two writing souls feel like they’ve found their other half. This is their most favorite adventure thus far. ​